23rd October (Colombo), Heaviest defeat for England in one day international by 219 runs Dls against Sri Lanka in Fifth ODI at Colombo. Sri Lanka restricted England to 132 for 9 in their Chase of 367 before rain interrupted.

After winning the toss Sri Lanka opted to Bat first, Sri Lankan opener Batsmans charged on England bowlers early, Niroshan Dickwella and Sadeera Samarawickramna played a fine knock and they made a partnership of 50 runs in 39 balls and 100 in only 89 Balls. After every over, they were eyeing for the big total. Sri Lanka's top four all blasted half-centuries at Colombo.

Sri Lanka loses their first wicket on 137 runs in the 20th Over. Sri Lanka managed to get their record total without a single milestone, as Niroshan Dickwella misses his ton by 5 runs and he gave his wicket when he was on 95 runs. Sri Lanka couldn't accelerate the way they would've liked to in the death but still managed to add 81 runs in the last 10, and ended up with their highest total against England.

whereas England Skipper Eoin Morgan was rested for the inconsequential encounter, and the team was led by Jos Buttler.

While Chasing England lost 3 wickets early in 2 overs only, Openers Again Failed to build Partnership. Root was also seemed not to middling the ball with his bat and he also gave his wicket at the score of 28 for 4.

England two All rounders ben stokes and Moeen Ali Shared 79 runs Partnership for the Fifth wicket. Ben Stokes was struggling with cramp throughout his innings, and he scored 67 runs of 60 Balls. But the required rate was increasing on the other side due to which they played lofted shot and miss timed the ball.

But the away side crumbled with Liam Plunkett the last man out before the heavens opened.

The visitors will be looking to bounce back quickly in their last white-ball match if the tour on Saturday when they play a one-off T20I in Colombo.

MAN OF THE MATCH
Niroshan Dickwella (95*)

MAN OF THE SERIES
Eoin Morgan 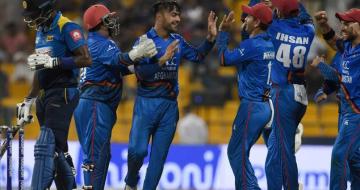 Srilanka lost to Afghanistan by 91 runs in must win situation. 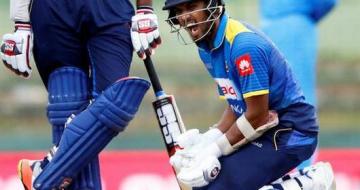 Chandimal out of Asia cup due to finger injury