ICC’s polarising rulebook for knock-out games came into focus yet again, when England were knocked out of the Women’s T20 World Cup, following their rained-out-semi-final against India.

With no play possible at the Sydney Cricket Ground, India advanced to the final on account of a superior standing in the group stage,  having topped Group A, as opposed to England who were second-placed in Group B.

“Really frustrating,” Heather Knight exclaimed after the game was called off following persistent rain. “Would have been good to have a reserve day perhaps. That loss to South Africa cost us. We expected to reach the semi-finals and that we did. We did feel like we had started to gain momentum in recent games and we were really ready for this semifinal. We were undone by the weather”

The loss to South Africa, a last-over defeat in their opener, might have ended differently had Katherine Brunt not opted out of mankading the non-striker, with seven needed off four. Next ball, Mignon du Preez blasted a six, and as things transpired, South Africa went on to stay undefeated in the league stage, whereas England won their remaining games, but stayed second in the group.

When asked in the press conference if a mankading could have made things different, an unimpressed Knight rebuffed the theory, plainly retorted “No, next question”.

On Thursday, to play the required minimum of 10 overs, a window of at least 86 minutes was needed. After the cut-off of 4.49 pm local time was reached, no play was possible. Consequently, India advanced to the final for the first time, even as their winless record against England [five losses in as many T20 World Cup games], stays intact.

As expected, there were questions abound about ICC not incorporating a reserve day for a game as big as the semi-final. In response to an Instagram post about the result from ICC’s official channel, England Test bowler Stuart Broad questioned the reasoning behind not having a reserve day. “Why no reserve day @icc? Seems sensible,” his comment read.

Before the match, an ICC spokesperson made it clear that adding another day was not ‘feasible’ for tournament logistics.

“The ICC T20 World Cups are short sharp events where reserve days are factored in for the final. Allowing for any other reserve days would have extended the length of the event, which isn’t feasible. There is a clear and fair alternative should there be no play in any of the semi-finals with the winner of the group progressing.”

India captain Harmanpreet Kaur maintained that the side’s priority was to win all games, with the current rules in place.

“It is unfortunate not to get a game due to the weather. But that’s how the rules go. In future, it would be nice to have a reserve day. From day one, we knew that we have to win all the games because if in case we don’t get any play in the semifinals, it will be hard for us.

“Credit to the team, we wanted to win all the games and we did it.” 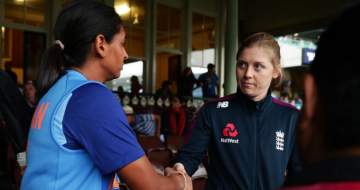 ICC’s polarising rulebook for knock-out games came into focus yet again, when England were…