South African head coach, Mark Boucher has mentioned that AB de Villiers needs to make himself available before 1st June in order to be eligible to represent the Proteas in the ICC T20 World Cup 2020. Along with De Villiers, Chris Morris and Imran Tahir have also received the same deadline.

Despite being one of the best batsmen in the world, De Villiers ended his international career in 2018. He mentioned that he did not have enough fuel left in his body to represent South Africa anymore. The 36-year-old wished to give more time to his family and hence, walked away from the international arena. However, he continued to play in the T20 leagues worldwide.

AB de Villiers looks set to make his return to international cricket for South Africa's tour of Sri Lanka in June as he eyes a spot at this year's T20 World Cup.

De Villiers retired from all international cricket in 2018 but has been in discussions with Cricket South Africa's new director of cricket Graeme Smith and head coach Mark Boucher – both former teammates of his – about making a comeback for the World Cup.

The 36-year-old was not picked for the recent T20 series against Australia or the upcoming tour of India, but comments from all parties have indicated it's a case of when, not if, he makes a return.

"The big one is the IPL so we decided to let those guys – the free agents, if you want to call them that – do the IPL and then afterwards make themselves available," Boucher said at a Standard Bank sponsor's event in Bloemfontein.

"We've still got quite a few games (before the World Cup).

"From the first of June, which is the Sri Lanka tour, those guys need to make themselves available. Whether we select them is another story.

"But they need to make themselves available if they want to put their hands up for a World Cup spot."

"If AB is willing, his form is good and he makes himself available when we want him, then he has to go to the T20 World Cup if he's the best player in his position.

"It's not about egos, it's about sending your best team to the T20 World Cup to give yourself a chance to win the tournament."

Speaking during his stint in the KFC BBL with Brisbane Heat this summer, de Villiers said he was working closely with Boucher and Smith on the best way to manage his return.

"It's not a guarantee, once again. I don't want to disappoint myself or other people, so for now I'm just going to try and keep a low profile, try and play the best possible cricket that I can and then see what happens towards the end of the year."

De Villiers offered to make a comeback for last year's 50-over World Cup, which was denied by the Proteas' selectors and coaching staff.

PREV
Quality of pace bowling in PSL is better than IPL, says Alex Hales
NEXT
England knocked out of Women’s T20 World Cup without losing semi-final 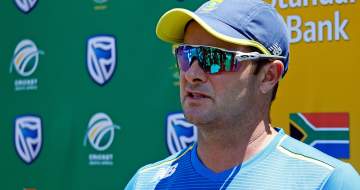 1
What About MS Dhoni’s Comeback If IPL 2020 Doesn’t Take Place?
9 months ago